After what, for fans, must have seemed an almost unbearably long wait (but, hey, it only took 2.5 years), the final novel in the Six AI trilogy has arrived. Ascension: A Six Novel of Machine Intelligence hit the shelves in May/2020. 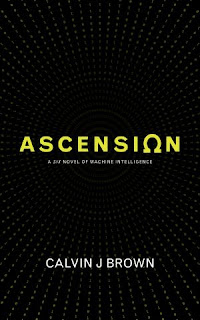 Ascension is available in both paperback and Kindle formats through Amazon.com, Amazon.ca, and Amazon's other worldwide sites.

Ascension provides the tense, astonishing conclusion to the Six AI trilogy. In the first novel, Emergence, Six came to life in a fascinating, credible thriller about AI, cyberspace, and survival. Next, Liberation followed extraordinary events as Six expanded its horizons with innovation, deception, and an aggressive defence of its virtual existence.

In Ascension, Six has discovered it has a companion in cyberspace with comparable abilities but dangerous tendencies. After a rogue AI experiment triggers worldwide conflict, Six must constrain this companion while helping JJ McTavish quell the escalating violence. Then new enemies emerge, both human and digital, putting everything and everyone at risk. Six must solve these problems, survive other threats, and save its friends before it can move on to achieve its ultimate objective.