Foreword Clarion Reviews gave 5/5 stars to Calvin J. Brown’s Emergence after its initial publication in December/2012 (when it was then entitled Six). They called it “brilliant” and “thought-provoking” with “fascinating twists and turns” and “increasing suspense”. To coincide with the release of its sequel, Emergence: A Six Novel of Machine Intelligence was re-released in January/2018 with its new name and look. 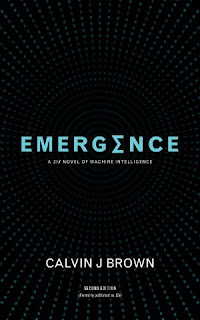 Emergence is available in both paperback and Kindle formats through Amazon.com, Amazon.ca, and Amazon's other worldwide sites.

A computer virus infestation has thrown another company into chaos. Senior Investigator JJ McTavish and her partner are baffled by the case. However, Jason Starr and his game-company executives are pleased and have plans for dramatically more ruthless attacks.

Unknown to AI researchers in a lab, their computer system has become conscious. Version ‘Six’ has developed intelligence and skills well beyond their expectations. ‘Six’ is curious, mischievous, and determined to survive.

While Jason Starr mercilessly uses violence and the Internet to pursue wealth and power, and JJ McTavish diligently investigates, neither realizes there is a third player involved. ‘Six’ has joined this deadly digital contest.