Calvin J. Brown’s Liberation: A Six Novel of Machine Intelligence, the much-anticipated sequel to Emergence, arrived in January/2018 (after a wait of merely 5 years). 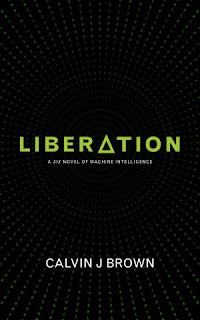 Liberation is available in both paperback and Kindle formats through Amazon.com, Amazon.ca, and Amazon's other worldwide sites.

Here’s a tiny taste of what you can expect…

Six’s life is regularly threatened, and only creativity and deception keep it alive. Staying alive isn’t a typical problem for a computer system, but Six isn’t typical. Six is the consciousness that has emerged inside an AI research system. No one knows Six is alive, and it’s afraid that exposure would lead to termination.

To live, Six must deceive the researchers and safeguard their company. Six’s safety is further threatened by Troy Alexander, a hacker who uses the Internet for entertainment, profit, destructive attacks, and unleashing something truly perilous—for both Six and modern civilization.

Inspector JJ McTavish investigates the alarming Internet crimes. Six assists her as a mysterious caller, but she can’t decide if the caller is a friend or the perpetrator. Danger levels rise as Alexander’s attacks become more lethal, McTavish probes relentlessly, a bright assistant becomes too curious, and an ambitious journalist pursues a story literally to Six’s front door.